In Washington State there are only two statements that have to be included in wedding ceremonies to make the marriage legal as long as the person marrying them is qualified to perform the ceremony.  The "Do you take" and "Do you take" statements are to prove that neither person is entering the marriage under duress.  The other required statement is simply with them being declared as husband and wife, husband and husband or wife and wife, spouses for life, whatever the case may be.  If these two statements are not recited or duplicated in some manner, Washington State technically, does not recognize the marriage.

Seldom does anyone want a ceremony with only the two required phrases.  At the minimum there are the so-called love, honor, cherish vows and the inclusion of some kind of ring ceremony.  Beyond that, is where the uniqueness that most couples crave comes into play for their own weddings.  So let's talk a bit about how sand, rocks, candles, wine boxes, roses, oathing stones, brooms, and cording accomplish that for a wedding ceremony.  Keep in mind that these are just starting points and that many couples add personalization to personalization!  People often enjoy borrowing customs from other cultures.  As a wedding officiant, this keeps things very interesting! 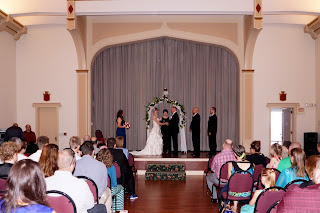 The Sand Ceremony involves at least two colors of sand that are usually placed in two glass containers and poured together by a couple or two or more family members into one container signifying that two lives or two families being blended together can never be separated.

The Rock Ceremony is unique and includes guest participation.  For example, there would be a rock set on every chair and the guests hold the rock in their hands and make a wish for the happiness of the bride and groom and their life together.  The guests then place their "wish" into a container.  I've seen the bride and groom place the first rocks in the bottom of a box on which they've written faith, hope and love on them representing a good foundation and all the others wishes built upon that.  I suggested this type of ceremony for one couple whose wedding was outdoors and they hadn't thought about the consequences of having programs on each chair.  Obviously, they would not stay on the chairs and needed a paperweight!  It took on a very special meaning because for generations the bride's family had a cabin on Flathead Lake.  That lake is known for the stones there that are flat.  A family member delivered enough rocks from their cabin to be used for the ceremony.

This is the ceremony that most people are familiar with, but is not used as often because of most venues banning the use of candles.  Two candles are lit and are either used by the couple getting married or perhaps both of the couple's mothers who then light a single candle signifying the uniting of two families.

The Wine Box Ceremony has at least a couple of variations as far as its purpose.  The couple will write a letter describing their love for their future spouse and during the ceremony, each will place their letter  into the wine box which has already had a bottle of wine placed in it.  Here's where the purposes can vary.  Some couples open the box on their first anniversary and read the letters to each other and celebrate with a glass of wine.  Other couples will save it for their first fight and read the letters to remind themselves of their love for each other and again relax with a bottle of wine.

The Rose Ceremony is one that can be used in a variety of ways, but the most traditional rose ceremony involves the bride and groom taking a rose during the ceremony and giving it to their now mother-in-law.  Again, it is a symbol of blending two families.

The Oathing Stone ceremony originates from Celtic tradition.  A bride and groom would place their hands on a large stone often near a river which would be considered a connection to their ancestors. They would sometimes etch their names in the stone.  This is also how carving initials in trees began.  Today, couples can buy a stone with their initials carved into it.  At their wedding ceremony they both hold together in their hands the stone while the vows are being read.  This would be difficult with vows they had written rather than listening to and responding with short phrases during a ceremony.

The Broomstick ceremony has its origins in parts of Africa.  Over many centuries, the significance of the broom changed in meaning.  However, it was one tradition that survived during slavery.  That in itself made the broom ceremony one which became more of a bad reminder of that era.  After Alex Haley's book and movie Roots, were was made famous in the 1970's, the interest in this tradition was rekindled.  It was and is also common in ancient and modern Celtic wedding ceremonies.  At a wedding, after the couple has been pronounced as a married couple, they both jump over the broom at the same time.  Now it represents the beginning of a new life together.  Ancient African meanings were not so charming in that whomever jumped over the broom the highest was to be the "ruler" of the household.  (I would have said, "Ladies, practice jumping...really high!")

The Handfasting Ceremony in another tradition from the Celtics.  Again there are many variations of this type of ceremony.  A cord or ribbon is used to bind together a couple's hands with the cord or ribbon binding wrapped once more over their hands for each vow that is recited.  This is literally where the expression "tying the knot" originated.

I could go into much more detail on the blending of cultures in wedding ceremonies, but that will have to wait until another time.  Including one of our funniest wedding officiating stories ever! 💝

Wishing you the greatest of days!