If You Think You Don't Need a Rehearsal, Think again!

First, here are some definitions for you and terms of reference.  Also, Bride and Groom are interchangeable with the word couple.

The Processional is the part of the wedding when typically the officiant, the groom, all of the attendants including the ring bearer and flowergirl proceed to the ceremony or altar area followed by the bride with whomever is giving her away.

The Recessional is the part just after the couple is introduced to the "audience" when the couple first leaves the stage/ceremony area/altar followed by the bridal party and family.

Here are some benefits and recommendations regarding rehearsals:

1.  It helps calm everyone's nerves feeling that they have a good idea of what will happen leading up to, during and immediately after the ceremony on your wedding day.

3.  It will give you an idea of timing your processional to the music.  Even though a DJ often cannot attend a rehearsal due to possibly having multiple weddings on a weekend, you need to discuss options for timing of your processional.  Your DJ might want to preview the venue with you months or weeks in advance of the wedding, if they haven't worked at your venue.  Timing can be effected with  the length of the aisle and the number of people (alone or in pairs)   walking up to the ceremony area.

4.  It's not uncommon for people in your wedding party to be complete strangers to each other.  They get a chance to at least recognize each other's  faces on the wedding day.

5.  Practicing the recessional is important, too.  As a rule of thumb, I recommend that following the ceremony (after being pronounced to their new status and after they are introduced to everyone) that the newly married couple gets to walk the full length of the aisle before the rest of the bridal party.  This allows every opportunity for them to be photographed at the first moments of them walking down the aisle with their first steps or happy dance as a married couple.  Next to go down the aisle would be the Maid of Honor and Bestman who would walk halfway down the aisle before the next pair of the bridal party begins walking.

6.  If you have any major announcements, the most important people in your wedding are there.  They can be your ambassadors to spread necessary information to others on your actual wedding day.

2.  To make the pictures look nice, it should be predetermined that the guys have their hands placed in front of them or behind their backs.

3.  Anyone carrying bouquets should place them (in simple terms) at their belly button!  The exception would be if the bridesmaids were cradling a larger single, long-stemmed flower to the inside of their elbow instead of a bouquet.  (in the crook of their arm but still, they should look uniform during the ceremony).

4.  It looks nicer if everyone stands to form a slight arc and not look like little tin soldiers.  If everyone takes a half step sideways towards the "audience" and slightly angles to be looking at the officiant and couple, it looks good but it also is important to be able to see subtle clues from the officiant during the ceremony.  It sometimes helps to line up on the stage or ceremony area so that attendants can have eye contact with their counterparts.  For example, the Best Man and Maid of Honor would be able to have eye contact and the same with everyone else down the two lines.

5.  If for some reason one of your attendants, is unable to attend the rehearsal, make sure that the person that they will be walking with them is introduced to them on the wedding day.  Preferably they are introduced in advance of pictures that are often taken prior to the ceremony.  Whoever was able to be at the rehearsal should fill that person or persons in on what is going to take place during the processional, how everyone is going to be standing during the ceremony and the same with the recessional.

6.  It's not a bad idea to ask people to not treat the night before your big day like it's a bachelor or bachelorette party.  What they drink that evening directly influences the wedding the next day.  Nothing wastes the rehearsal or mars a wedding more than one or more of the wedding party getting drunk.  It's time for everyone to at least pretend to be mature and respectful but still have fun.

Order of a processional for a traditional modern American ceremony.  It can vary from one religion to another, be customized or adapted depending on the venue layout.  Nothing is written in stone anymore for most weddings, but it's nice to have some guidelines.  Neither the order of seating nor the recessional is shown in the diagram. 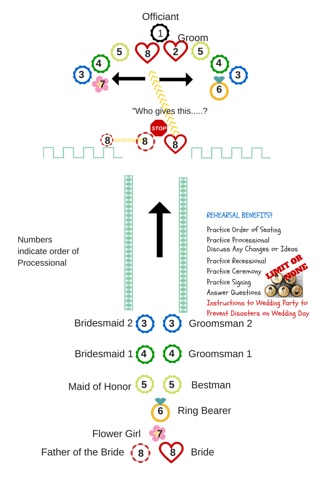