Bridezillas and Their Replicas! Beware!

Bridezillas and Their Replicas! Beware!

Bridezillas and Their Replicas,  Beware!

Yes!  You think weddings are expensive?  Well, Zillas of all types, you have inadvertently or not, contributed to this for two primary reasons.  Wedding vendors are seldom wealthy and have a lot of hidden costs, so putting up with bad behavior just makes whatever profit they have made not worth the trouble.  So they either quit or raise prices.  Supply and demand effects any industry.

Unless you've been around the wedding industry a lot, you would not know how many vendors, who can provide their services to other types of clientele say, "I don't do weddings anymore!"  This can range from planners, florists, photographers, caterers and so forth.  They usually say that there's just too much drama, clients who think that they should get everything for nothing, and engaged couples and their families are getting ruder and sometimes violent when they are just trying to do their job.  I've seen it all myself!  Couples will also come up with the craziest excuses to not pay for services. If they heard that message from their own bosses, they certainly wouldn't appreciate it, but it's okay in many couple's minds to do just that.  People outside of the industry are generally surprised to hear what we put up with in the wedding industry. 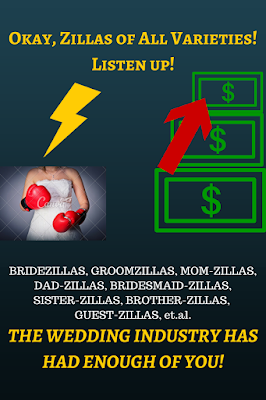 Bridezillas, if you think about how you like to be treated at work by customers or co-workers, then imagine how people feel when they are doing their best to make a wedding the best possible.  However, if you have not communicated as your vendors have requested, make frequent changes, fail to relay important information or especially make last minute changes, you are asking for something to go wrong.  It's that way with everything in life.  If a bride tries blaming everyone else,  whether it be friends, family or vendors, that sets the tension to a higher level for the whole day.  If a bride rolls with the punches and is half-way gracious, the atmosphere is completely different. Everyone picks up on that energy whether it be positive or negative.

What seems to have caused the bride/guest zillas problem?  They show inexcusable bad behavior ranging from words to temper tantrums towards family, friends or anyone who is involved with the wedding.  What has made this behavior seem acceptable in many people's eyes?

The problem is big enough to come up at industry and networking meetings.  The question that's asked is, "What do we do with all of this bridezilla behavior and even their friends and families?"  The general conclusion is that about all they can do to tolerate it is to raise prices.

I would attribute the bridezilla or other zilla behavior to several factors, and I know that other vendors share my opinion on this.

1.  It probably starts with what is taught as acceptable behavior when dealing with people in general from the time they were young.

2.  Many people of the generation that are getting married now, were in general given whatever they wanted.  Perhaps they have been dreaming of their wedding day for years.  That's nothing new, but more recently it's been with a different mindset of entitlement.  I've heard of brides saying, "But it's my wedding!"  So vendors are supposed to just hand out their services like candy on Halloween?

3.  The media with all the "reality" shows paints a dream wedding that few people can afford, but having been used to getting what they want, they can't accept that the same can't be theirs.  The "reality" shows thrive on drama, but that does nothing to help a real wedding go smoothly where everyone can still be friends at the end of the day.

4.  The media, especially the one that is named after "perfect vision" (in the form of numbers) broadcasts sensationalized shows that paint the industry with a broad brush that does not come close to matching what I've seen of hundreds of vendors.  They spend most of those shows comparing apples to oranges.  If their purpose is to educate the public, they are actually doing a disservice to the public by misrepresenting the industry.  Other shows piggyback off of those shows and perpetuate the myth.

Let's not forget the wonderful clients who we would gladly adopt as family.  The ones who appreciate our efforts and treat us as professionals.  I've had more of them than the bridezilla variety.  Those clients have usually not had the easiest lives and are far from anything like a spoiled brat.  They couldn't be more opposite than that.  Like anything else, it's the few bad apples that can ruin the whole batch.  You might have even heard teachers say that they remember the really nice students and the ones who were just the opposite.  The same principle could apply to weddings.

Wishing you the greatest of days!

Click here to learn about our upcoming podcasts on wedding planning on our "Engaged!  What's Next?" Facebook page!